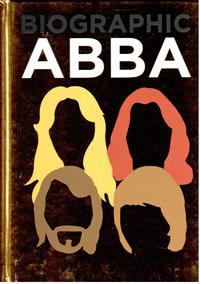 Most people know that ABBA (1972-1982) were a Swedish band who became one of the world’s most successful pop groups after winning the 1974 Eurovision Song Contest with their song ‘Waterloo’. What, perhaps, they don’t know is that they have sold over 380 million albums and singles; that their name was chosen through a newspaper competition, alternatives included ‘Alibaba’, ‘FABB’ and ‘Baba’, that their royalties from the Soviet Union were so big they had to be paid in oil rights, and that 3.5 million people applied for tickets to see ABBA at London’s Royal Albert Hall in 1977. Biographic: ABBA presents an instant impression of their life, work and legacy, with an array of irresistible facts and figures converted into infographics to reveal the musicians behind the music.