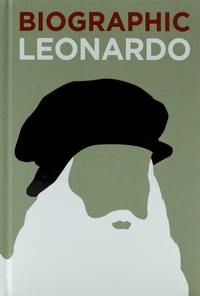 Many people know that Leonardo da Vinci (1452-1519) was an Italian polymath, one of the great creative minds of the Italian Renaissance and the painter of the Mona Lisa and The Last Supper. What, perhaps, they don’t know is that his original notebook Codex Leicester, was sold to Bill Gates for $30 million, that as an ambidextrous, paranoid dyslexic, Leonardo could draw forwards with one hand while writing backwards with the other, and that he invented an armoured car, a flying ship and contact lenses. Biographic: Leonardo presents an ingenious guide to his life and work, with an array of irresistible facts and figures converted into infographics to reveal the master behind the masterpieces.