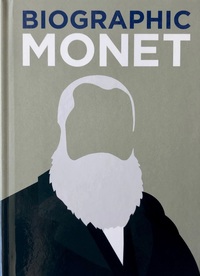 Many people know that Claude Monet (1840-1926) was a founder of French Impressionism, a master of landscape painting whose works include ‘Impression, Sunrise’ and ‘Water Lilies’. What, perhaps, they don’t know is that he created the ponds featuring those water lilies and spent 30 years painting 250 oils of them, that his water-lily work ‘Le Bassin aux Nymphease’ sold in 2008 for £40 million, that his painting ‘Cliffs Near Dieppe’ was stolen not once but twice, and that he was almost blind when he painted some of his most famous works. Biographic: Monet presents an instant impression of his life, work and fame, with an array of irresistible facts and figures converted into infographics to reveal the artist behind the pictures.