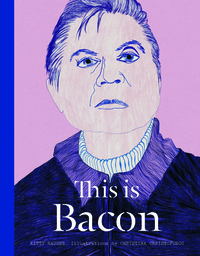 Francis Bacon was one of the giants dominating the artistic landscape of the mid-twentieth century, and served as the inspiration and launching point for much of the figural and abstract art that came after him. This highly illustrated book features 19 of the artist’s major works. In stunning original colour illustrations it portrays the events of his life and the circle of friends and associates with whom he formed a louche, brazen gang that cut open the belly of the old propriety. The major periods of Bacon’s life on the edge, such as his time spent in Berlin, Paris and the seedy milieu of post-war London, are portrayed, along with the influential figures, such as Peter Lacey and George Dyer, who shaped both his personal life and his art. An original and highly visual book, This is Bacon forms a fascinating, readable and provocatively entertaining introduction to one of the most influential masters of twentieth-century art.

This is Van Gogh