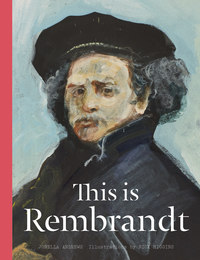 Rembrandt van Rijn is the quintessential Old Master. His intimately observed, vivid and profoundly atmospheric works are what many museum-goers consider traditional painting ought to be. But in his own lifetime Rembrandt was not always so well regarded. The expressive honesty of his paintings and prints could evoke disdain as easily as admiration. For more than a century after his death his style was dismissed by many academically trained art theorists and critics. In the nineteenth century, however, he was championed by artists fired by the revolution and change of their times. For them, Rembrandt was a kindred, radical spirit, his paintings imbued with a truly modern ethos.

Born at the beginning of the seventeenth century in the Golden Age of the newly formed Dutch Republic, Rembrandt found early fame and great wealth as a painter, living with the opulence of a rock star. But he spent way beyond his means. When, midway through his career, public taste turned away from him, these combined factors proved ruinous. For the rest of his life he would be destitute, crippled by debt, the loss of patrons and the deaths of loved ones. Nonetheless, he continued to paint with the same passion. The art he produced in his final years is arguably his most enduringly sensitive and open.

Jorella Andrews is a senior lecturer in the Visual Cultures department at Goldsmiths, University of London. She is the author of This is Cézanne andShowing Off: A Philosophy of Image, and the series editor for 'Visual Culture As', the first three titles of which have been published by Sternberg Press.

Nick Higgins is a London-based illustrator with many clients in publishing and advertising, including The New York Times, The New Yorker, The Royal Shakespeare Company and BBC World Service. He is a keen cyclist and has a passion for nature, science, history and myth—all themes clearly evident in his work.

This is Leonardo da Vinci

Read This if You Want to Be Great at Drawing